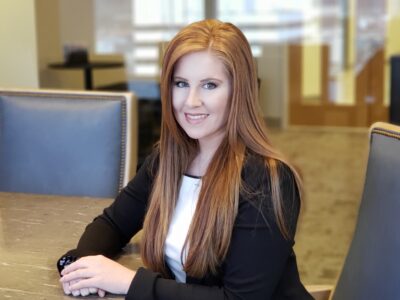 Anna Adkins (formerly Anna Butcher) was born in Charleston, West Virginia and raised in Logan County, West Virginia. She graduated from Chapmanville Regional High School in 2009 and from there, she attended and graduated from West Virginia State University with a Regents Bachelor’s degree in criminal justice in December 2015. Prior to law school, Anna gained experience in family law by working in Mingo County Family Court for two years. In August 2016, she began her legal education at Appalachian School of Law in Grundy, Virginia. Throughout law school, Anna was president of the Criminal Law Society, she served as secretary for the student bar association, was a member of the Phi Delta Phi Legal Honor Society and the Appalachian Women in Law Society, and also served as a Court Appointed Special Advocate (CASA) for children in the 29th judicial district of Virginia. Anna also earned a Juris Master’s degree and a certificate in criminal litigation from Appalachian School of Law.

In the summer of 2017, she interned with West Virginia Public Defender Services in the appellate division where she assisted the appellate attorneys in preparing criminal appeals to be heard in front of the West Virginia Supreme Court of Appeals. Anna also interned with the Logan County Public Defender‘s Office where she assisted with court appointed criminal cases during the summer of 2018 prior to her final year of law school.

Anna is admitted to practice in the following jurisdictions: West Virginia and U.S. District Court Southern District of West Virginia.